The Rotary Club had prepared the field, the marquee was ready and dawn broke on Saturday to a summer morning, with sun and white puffy clouds.

It was the day of the 8th Fordingbridge Summer Festival. Soon the peace of Fordingbridge Recreation Ground was broken by the arrival of 16 working craft displays, 50 trade stands and, most important, nearly 30 local charities and community organisations and the Fordingbridge Horticultural Society.

The Festival is a great day out for families, so children get in free. 2400 adults and 1150 children came “through the turnstiles”. But it has other purposes. Our community organisations meet regularly but they rarely meet each other. Their stands were manned by around 300 people. On the Festival field they meet, talk and gain new members. So underneath the obvious arena events there is a continuous buzz of conversation and greeting as the community comes together.

The arena hosted a wide range of events. Two groups of heavy horses were popular, as usual, but the show was stolen by the children. They took on Toby the Tractor and beat last year’s two wins out of three pulls with a three-to-nothing walkover: and then there was a training session with the youngsters joining in with the hilarious Male Majorettes. It quickly became clear that the children were better than the men and they have all been offered majorette jobs for next year.

As always we were well supported by local businesses including A E Connock, Elliott’s, Edwards Ford, Hopback Brewery, Fordingbridge Day Nursery, I N Newman, and the many others who bought tickets for the Business Duck Race.

The climax of the Summer Festival is always the Duck Race. The Business Race was run first, won by Dibden Joinery with Hillwood Motors second and Hot & Tasty third.

Then Mayor Malcolm Connolly launched two thousand three hundred well-fed plastic ducks into the Avon by to compete fiercely in the main race. The winner of the £500 first prize and the other prize winners are being contacted but we were delighted when second prize went to Mme Jay, visiting Fordingbridge with the Twinning party from Vimoutiers. In a black week for France it was good to cement this relationship with Duck Race success.

The weather had been warm but not too hot with a gentle breeze to refresh us. As the happy visitors left the field at five an army of more than thirty yellow shirted Rotarians descended. The field was cleared in record time. Festival Chairman Stan Broomfield said, “All quiet now, but we have had a great day for everyone to remember”.

This year was the biggest Festival yet, with 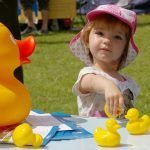 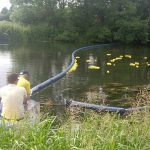 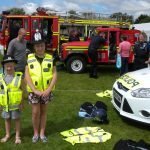 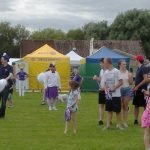 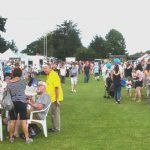 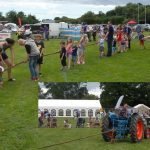 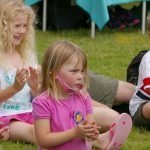 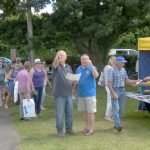 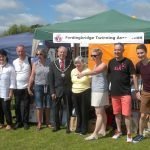