The History of English Wine Growing

On 27th September the Club welcomed English wine grower Roger Marchbank and his partner
Diane. Roger is a former chairman of the National Vineyards Association.

He gave an interesting talk about the history of wine dating from 5000 years BC to the Roman
invaders who planted vineyards in England very successfully and the decline brought about by the
Viking and Saxon invaders who preferred drinking mead. By 1930 there were about thirty vineyards
in Britain but with changing habits numbers had grown to about 200 in the 1970’s. 2012 was a particularly
bad year as the grapes did not ripen.

White wine, he said should be served at 9 degrees and not from the fridge at 4 degrees.

To conclude his talk Roger and Diane served everyone with a glass of their own white wine and instructed members to cuddle the glass, sniff and gargle the wine so that the aroma entered the nose. His talk provoked lots of questions and Derek Ayling gave a vote of thanks.

Congratulations to Karl for having organised yet another excellent speaker. 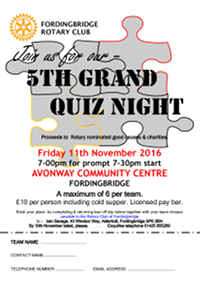 All 17 team places have now been booked for this year.  Look out for next year's quiz and get in early to avoid disappointment.

There is a maximum of six people per team, and the cost is £10 per person, including a cold supper.  There will be a licensed pay bar. World Polio Day will be taking place on Monday 24th October 2016, so it's time to get thinking about how your club can mark this important occasion!

Here in Great Britain and Ireland we are encouraging you to celebrate with a Purple Pinkie Day. This means you can do anything purple related, whether it's dressing up all in purple, illuminating buildings in your community in purple or co-hosting a family fun day with other local organisations.

This is a fantastic way to engage your local schools, businesses and communities at large. We have prepared a Briefing Note for clubs to give you some top tips!

End Polio Now have also prepared a number of digital assets including social media images and a World Polio Day toolkit for clubs to promote Rotary's fight to eradicate polio.

Please let the communications team know what you’re up to and also submit your event on the End Polio Now website.

Please have a look around to find out what Rotary is all about, and contact us if you wish to.