Rotary is not about politics or religion, but that doesn’t mean we can’t discuss current affairs. 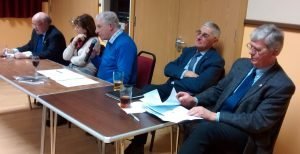 The panel of experts…

Questions from members had been given to the panel before-hand to give them a chance to do some research, and there was time for general discussion on each topic.

The questions asked were:

Answers on a postcard…