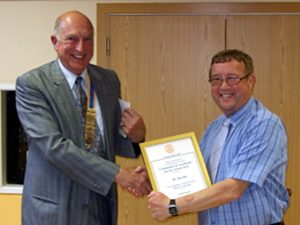 Ian Cole became involved with the Recreation Association in Alderholt shortly after moving here about 30 years ago and has continued his unstinting support ever since.

Alderholt has grown since then to about 3500 residents.

The Recreation Association is responsible for running the recreation ground in the village which supports several football and cricket teams as well as having tennis courts and a large children’s play area with swings and slides and other apparatus. There is also the  Pavilion and Sports Club on site.

He was Secretary of the Cricket Club for over 20 years but has served on the Recreation Association Committee for longer. He is currently both Treasurer and Secretary and carries out the tasks efficiently, effectively and without complaint and on a totally voluntary basis without even expenses being paid, though he was recently persuaded to accept a small honorarium.

For several years he has been involved with proposals to enlarge and enhance the facilities at the recreation ground. This has involved numerous hours of meetings and correspondence with Councils, Planners, Architects and Fund-raising bodies etc, yet despite some frustrating set-backs at times we are at last hopeful that all the plans may come to fruition in the next year or two.

He is one of those unassuming, unsung heroes who quietly carry on with the aim of providing and improving sport and recreational activities for so many of the residents of Alderholt and surrounding villages and I feel he thoroughly deserves the award .

Ian worked for the Ordnance Survey at Southampton, hence his move to Alderholt. His interest in Cricket created the link to the Recreation Association as already mentioned, now retired Alderholt has been the beneficiary of his time and efforts.