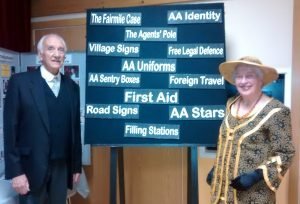 In August guest speakers David Weller and Vera Hughes (pictured) delivered a dramatised talk entitled “The AA Man”, taken from the memoirs of the association’s first secretary, Stenson Cooke. They described the early days of motoring when sneaky plain clothes police officers measured out a furlong and used a stopwatch to detect motorists exceeding the 20 mph speed limit. Outraged by this underhand practice some motorists got together and a new organisation was born to ‘fight for the open road and protect the motoring industry’.

One early idea was for cyclists to go ahead of the cars and search out the traps. In the ‘Fairmile’ case a member pleaded not guilty to speeding but was found guilty and fined £5. An ‘AA’ Scout however was arrested for perjury and although found not guilty faced considerable costs. To pay for his defence the ‘AA’ launched an appeal and raised £360.

An ‘AA’ badge was introduced, Scouts adopted the practise of saluting members and the membership soon rose to 940.

Police speed enforcement activity increased and the ‘AA’ appointed agents to stop motorists by use of a pole and advise them of the police activity ahead. Other initiatives included the development of road signs, free legal advice for members, uniformed Scouts and ‘AA’ sentry boxes.

A northern office was established in Manchester and by 1908 the association had 5000 members. Members wishing to drive on the continent were assisted with the necessary documentation and cars were shipped as baggage.

Another Scout prosecuted for warning drivers of a speed check was convicted of obstructing the police and a subsequent appeal was dismissed. ‘AA’ members were then advised to stop if not saluted and so receive a more subtle warning of trouble ahead.

Other developments included Scouts being trained in first aid, road safety instruction for children, and the introduction of the hotel star classification system.

The ‘AA’ became a political pressure group and succeeded in its campaign for the abolition of the 20 mph speed limit.

From a shaky start when the association was despised by the establishment the membership had grown to half a million by 1933. Its long serving secretary Stenson Cooke was knighted for services to motoring.

Speaker secretary Karl Jung thanked the speakers for their talk.